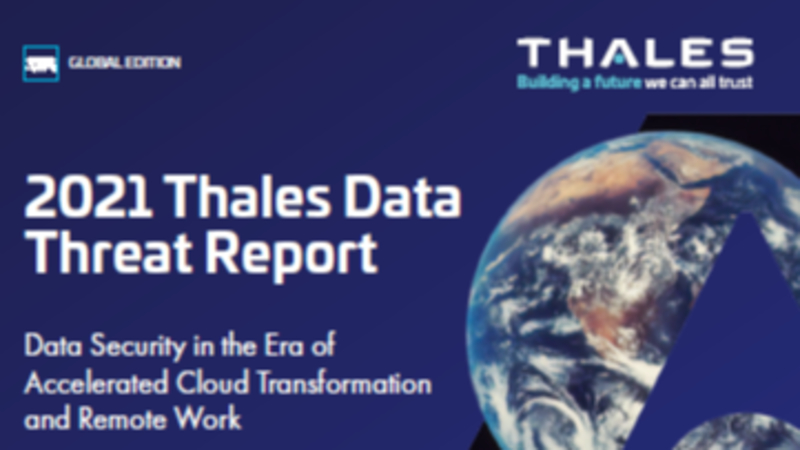 Despite being over a year into remote working and looking ahead to likely shifts to hybrid remote/in-office working models, four fifths (82%) of businesses still remain concerned about the security risks of employees working remotely.

This is just one of the key insights from the 2021 Thales Global Data Threat Report, a commissioned study conducted by 451 Research, part of S&P Global Market Intelligence, which reveals that managing security risks is undoubtedly getting more challenging, with nearly half (47%) of businesses seeing an increase in the volume, severity, and/or scope of cyber-attacks in the past 12 months.

Attacks on the rise

In fact, of those who have ever experienced a breach, two in five (41%) happened in the last year. This number has nearly doubled from 21% in 2019, marking a significant shift in the threat posed.

Globally, malware (54%) is the leading source of security attacks, followed by ransomware (48%), and phishing (41%). Yet, when it comes to how attacks occur, the message is clear: internal threats and human error are still of great concern to industry. A third of businesses stated that malicious insiders (35%) and human error (31%) are the greatest risks to them, followed by external attackers (22%).

Despite the increased risk remote working has posed to enterprises throughout the pandemic, nearly half (46%) of businesses report that their security infrastructure was not prepared to handle the risks caused by Covid-19. In fact, only one in five (20%) of organisations believe it was very prepared.

This lack of protection is affecting some industries more than others it seems, with just under two thirds (61%) of retailers surveyed experiencing a breach or failing an audit involving data and applications stored in the cloud in the past year – the most of any industry surveyed. Over half of organisations in the legal (57%), call centre (55%), transportation (54%), and telecommunications (52%) sectors also suffered the same fate in the last 12 months.

As increases in attacks continue, businesses are turning to the cloud to store their data in this digital-first world. Half (50%) of businesses report that more than 40% of their data is stored in external cloud environments. Despite this, only 17% of businesses have encrypted at least half of their sensitive data stored in the cloud. On top of this, complexity is an increasing issue, with many respondents now using at least two PaaS (Platform as a Service) providers (45%) and/or two IaaS providers (Infrastructure as a Service). A quarter (27%) of businesses are currently using more than 50 SaaS (Software as a Service) apps.

Sebastien Cano, Senior Vice President for Cloud Protection and Licensing activities at Thales comments: “Teams across the globe have faced huge security challenges over the last year as companies accelerated their digital transformation and cloud adoption initiatives. When migrating to multicloud solutions, data management can quickly spiral out of control. Organisations not only risk losing track of where their data is stored across multicloud environments but also fail to protect sensitive data in the cloud. With once unprecedented amounts of data now being used and stored in the cloud, it is vital that businesses deploy a robust security strategy based on data discovery, protection and control.”

Future challenges and the road ahead

However, despite businesses making moves to stop current threats, worries are growing about future challenges on the horizon. Looking ahead, 85% of global respondents are concerned about the security threats of quantum computing, a threat arguably exacerbated by the increasing complexity of cloud environments.

Garrett Bekker, Senior Security Research Analyst at 451 Research, part of S&P Global Market Intelligence added: “The native controls and protections available in cloud environments address a set of necessary capabilities, but they’re often insufficient to deliver effective protections for sensitive data and workloads, especially when it comes to compliance with regulations such as GDPR and the implications of the Schrems II ruling. Organisations need to increase their use of encryption and ensure they take full advantage of encryption’s benefits by controlling the secrets that protect their data through BYOK (Bring Your Own Key), HYOK (Hold Your Own Key) or BYOE (Bring Your Own Encryption) approaches. Organisations also need to make internal changes to ensure that personnel at all levels understand the security challenges and to properly align investment priorities. Senior executives need to obtain a more complete understanding of the levels of risk and attack activity that their front-line staff are experiencing.”