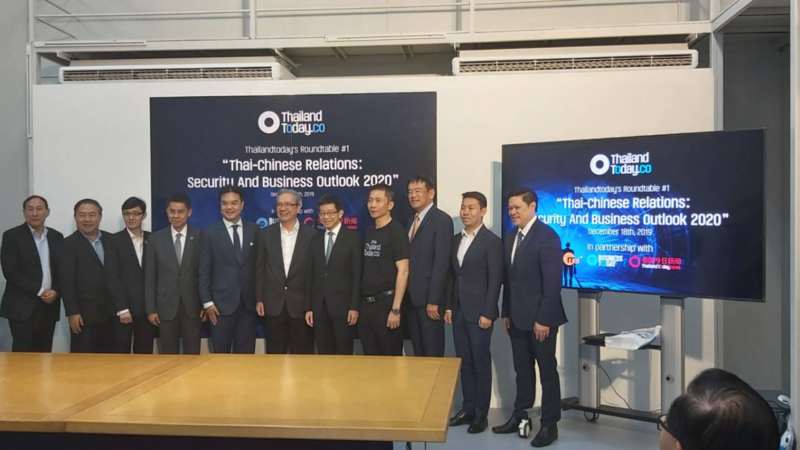 Dr. Panitan Wattanayagorn from Chulalongkorn University made three key observations about China in 2020  at Thailandtoday.co’s first roundtable discussion on December 18 on the topic Thai-Chinese Relations: Security and Business Outlook 2020.

Noting that China continues to be a rising power and a key player regionally and globally as evidenced by its increased presence and roles, Dr. Panitan  spoke of the challenges and opportunities this represents both to Thailand and other countries.

He first observation dealt with China’s economic slowdown and how this will have knock-on effects in many areas as well as on key projects such as the  BRI, the Mekong region, investment in military modernization and in space, thus impacting China’s rise in the short term.   Thailand needs to analyse the impacts of this economic slowdown, which include a drop in the number of Chinese tourists coming Thailand.

His second observation involves investment in high technology that while interesting, could have implications for national security, for example the investment in high-technology under the Chinese modernization plan, which is Thailand’s preferred option but is not favoured by the US.  That said, the high-tech investment in space, missile development, aviation and submarines over the past few years have raised concerns over the possible security of other countries such as those in the South China sea, both above and below the water level.  The political and strategic moves between the US and China in the trade war and in light of the economic slowdown and how these will slow the Chinese modernization plan will be important to watch in the year ahead  Thailand should recalculate the impact of the slowdown on Chinese investment.

Dr Panitan’s third observation addressed the short-term concern over Hong Kong unrest, which should be closely monitored.  There are worries that young Thais could copy the HK model for demonstrations, which uses applications that can communicate in a similar way to satellite or cellular links.  The major changes in Hong Kong following the demonstrations will take place and be felt in the long term.

Another two concerns are the developments in the  South China Sea under Vietnam’s ASEAN chairmanship in 2020 given the legacy of  Vietnam’s confrontation with China and the ongoing disputes between Chinese and US ships in the same waters. Were something to go wrong accidently, how Vietnam reacts to this dispute and leads Asean countries to counter China is as yet unknown. What is certain is that we will see greater Chinese influence close to Thailand such as in the Mekong sub-region following the appointment of members of the Chinese Communist Party to the Leading Small Group focused on Mekong basin activities and initiatives and, in the last few days, Chinese actions on narcotics in the Mekong regions.  Hopefully, China will pursue its own path of development and its influences over Asean countries will be peaceful.

Geopolitics with other countries is considered complicated as Thailand engages with many countries on various areas of interest. The complex engagement to achieve equilibrium is not easy and in Dr. Panitan’s view, only Thailand’s unique diplomacy can engage with other countries and big powers like China while at the same time stay away from the complicated issues that other countries are facing. This is possible because Thailand has maintained special relationships with many countries and has had a trusting relationship with China over the past century, despite thr official relationship between Thai-China needing to be rebuilt in 1975 when Prime Minister Kukrit Pramoj met with Chairman Mao Zedong.   He appreciates that China has restarted and committed to business dealings with Thais, giving as an example a Chinese-owned sofa manufacturing factory in his home province of Pattani, which has hired Thais and Muslims for its 100-strong labour force. Notwithstanding, he is of the opinion that many issues will become more complicated in the next few years as Chinese influences in many areas grow. These include the large hydropower dams and their effects on the environment, the expansion of Chinese communities in many countries and competitiveness in defense and military operations, all of which create expectations and tensions and present an enormous challenge to the Thai government as well. In parallel, the Thai-Chinese Association Cultural Centre has been set up along with 16 education institutions and these, along with many private associations ,might help to ease tension.   Thailand continues to maintain neutral diplomatic with China, the US and other countries and believes that China will realize that violence will not be beneficial to anyone and the US will stop panicking over China’s rise.   The presidential election in the US later this year will produce more equilibrium and Asean countries will remain key strategic locations by engaging with the US and China and others.