Govt upbeat about Thai economy in 2020 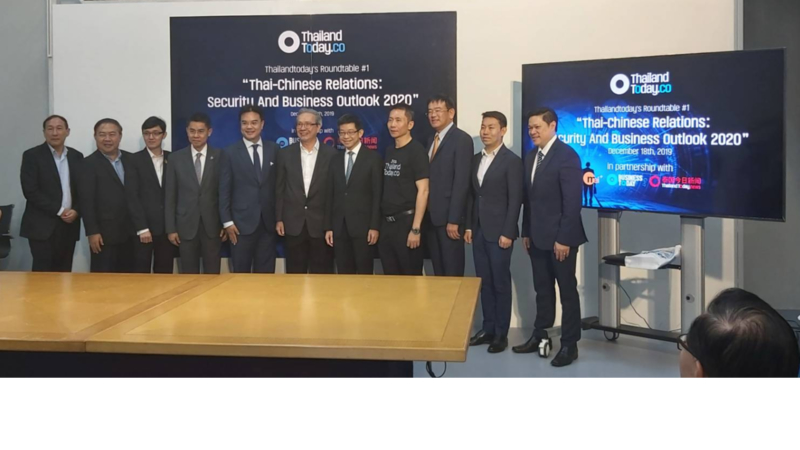 Despite many uncertainties and challenges facing the world in 2020, Thailand can be confident its overall economy will move forward due to a variety of positive factors, according to Kobsak Pootrakool, the Prime Minister’s deputy secretary-general.

Speaking at Thailandtoday.co’s first roundtable discussion on the 2020 Thai-Chinese security and business outlook, he said Thailand’s strengths include its strategic location in Southeast Asia, its strong long-term relationships with China and other nations in terms of exports and foreign direct investments, the continued promotion of the Kingdom as a preferred tourism destination for Chinese and other foreign visitors.

He said Thailand has also gained from the continued relocation of factories from China due to the US-China trade war, despite the latest announcement of a first-phase agreement. Besides the relocation of Chinese-owned factories to Thailand, other countries such as Japan, Taiwan, Korea as well as US and European firms have eyed Thailand as an alternative site for manufacturing.

In addition, Chinese telecom and tech giants, Huawei and Xiaomi have relocated their regional headquarters to Thailand. Another positive factor is the planned cross listing of stocks between Hong Kong and Thai stock exchanges will further expand the funding capabilities of Thai firms wanting to tap mainland Chinese investors.

However, he said, the government is also preparing domestic economic stimulus packages due to the unfavorable global economic and geopolitical outlook, which could affect Thai exports, tourism and other sectors, while pushing ahead the implementation of large infrastructure projects such as the EEC, high-speed trains, subway, motorways, airports and sea ports to keep up the investment momentum in the long run.

Although forecasts of Thai GDP growth have tended to show an overall downward trend to 2.6-2.8 per cent in 2019 albeit with slight improvements in Q2/2019 and Q3/2019  of 2.3 per cent  and 2.4 per cent respectively, Kobsak pointed out that this was the also the case in other countries and was related to the global economic slowdown and the impacts of the prolonged US-China trade war.

The key factors to watch now were the US President election in November 2020 and the de-escalating tension from the US during the election year.  The recent US-China phase-one trade agreement should be seen as a positive sign though the longer-term outlook would depend on the election outcome and subsequent negotiations.

The earlier increases in tariffs on Chinese-made products had caused panic among Chinese entrepreneurs and foreign investors with manufacturing plants in China, prompting many to consider relocation to a safer place. According to Zhao Bin, President of Rayong Thai China Industry Park, many Chinese entrepreneurs have enquired about and visited the industrial park in Amata City near Bangkok as a potential relocation site, thanks to the close relationship between Thailand and China.

To date, about 140 Chinese-owned factories have made the industrial park their home and this is forecast to reach 300 factories should the expanded industrial park area reach 12 square kilometres (equal to 12 million sqm).

The current workforce currently stands at 350,000 Thais and 50,000 Chinese and this is likely to reach a total of 500,000 workers in the near future.  Total investment value in Thailand by Chinese firms now stands at US$3.5 billion. However, the visa and work permit approval process is not flexible enough and needs to be revised to facilitate Chinese workers.

Factories in China owned by Japanese and South Korean concerns are  increasingly eyeing Thailand as an appropriate site for relocation while some Hong Kong residents are looking at Thailand as a contingency home should the demonstrations continue for a longer period.

Other major benefits of this long-term outbound investment from China as well as the current Thai baht appreciation are transfers of advanced technologies such as AI, data analytics, IoT, and 5G from  giant tech companies. This allows for the selection of partnerships and technologies that are best suited to the high-end value chain and for building the brand, and marketing strategies.

Prinn Panitchpakdi, head of the Democrat Party’s economic team, said Thai exports in 2020 could be better than expected if emerging markets and new free trade agreements are signed next year with the EU, the United Kingdom after Brexit, Turkey, China and India

Kobsak noted that that tourism is another key factor in growing Thai GDP with the 10 million Chinese tourists who visited in Thailand in 2019 making up 25 per cent of the total tourists and spending more than in previous years, despite facing a 15-20 per cent lower exchange rate as the RMB weakens against the Thai Baht.

Alternative transportation routes for goods to the Chinese market by road via Thailand’s northeast are also proving convenient and combined with the trust between China and Thailand plus new business opportunities with countries in South Asia, South Africa and Southeast Asia and continued relations and collaborations with the US and Europe should boost or at least stabilize the overall Thai economy despite the global economic slowdown and uncertainties.