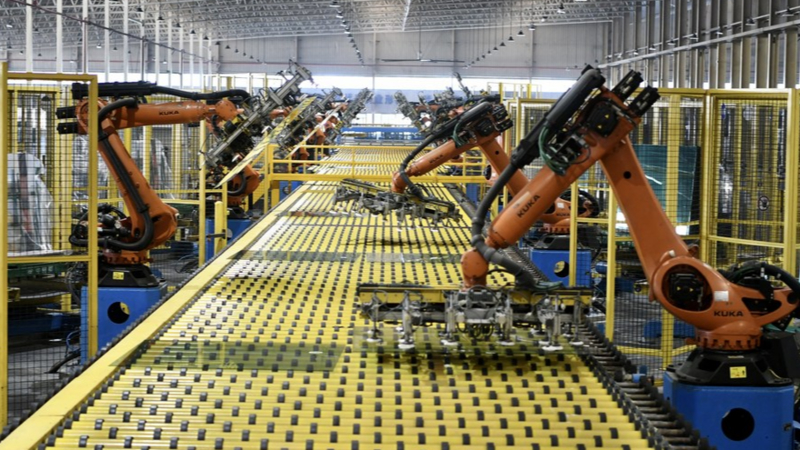 Robots operate on a production line at an automotive glass workshop of the Fuyao Glass Industry Group Co., Ltd. in Fuqing City of Fuzhou

Boasting high efficiency, low cost and most comprehensive industrial chains, China has long been positioned as the "world's factory." The country is now heading for the next goal: cultivate an upgraded manufacturing sector that is not only big but also robust and smart.

The latest data has revealed this changing landscape. The industrial output of high-tech manufacturers rose 17.5 percent year on year in May, 4.8 percentage points higher than the growth rate in April.

Such progress indicates that China, which used to be a follower in technological advancement, is leveraging its cutting-edge technologies to upgrade high-energy intensity and high-polluting sectors and build up new pillar industries.

Those familiar with China's industrial development have perhaps noticed that ideas like "digitalization," "smart factories," and "industrial internet" have been written into China's development plans, with specific goals set.

China's large manufacturing firms with an annual business turnover of at least 20 million yuan (about 3.1 million U.S. dollars) will have all introduced digitalization by 2035, said a draft issued by the Ministry of Industry and Information Technology (MIIT).

According to the draft, the technology and the market competitiveness of China's intelligent manufacturing equipment and industrial software will see significant improvement by 2025.

Sectors boosted by frontier technologies are expected to play a crucial role. In the country's policy blueprint for the 14th Five-Year Plan period (2021-2025), the value added by China's strategic emerging industries such as biological technologies, new materials and environmental protection will account for more than 17 percent of the total GDP.

The achievement of China's manufacturing sector paints a rosy future for reaching these goals.

By the end of March, the numerical control rate of key processes in Chinese enterprises reached 52.1 percent and the penetration rate of digital research and development (R&D) and design tools came in at 73 percent. Over 70 million industrial equipment has been connected by industrial internet platforms, MIIT data showed.

Different regions of China have found their distinctive advantages in the shift to high-end manufacturing. For example, central China's Hubei Province is pushing for the rapid growth of integrated circuit and intelligent manufacturing, Hunan Province enhanced expertise in construction machinery and rail transportation, while joint efforts have been made to boost biomedicine in the Yangtze River Delta.

From the perspective of the entire nation, strong manufacturing capabilities have enabled the Chinese people to realize dreams such as Mars exploration, deep-sea research and high-speed trains that could hardly be imagined decades ago. China's successful launch of three astronauts to its own space station last week is another example.

To further facilitate the high-quality development of the manufacturing sector, the Chinese government has ramped up supportive measures to lower companies' financial burden and offer more incentives.

China raised the extra tax deduction on the R&D expenses of manufacturing firms starting Jan. 1 this year. The move is expected to reduce corporate taxes by another 80 billion yuan this year, on top of the 360 billion yuan tax cuts last year.

Moreover, special attention has been given to small and medium-sized manufacturers, a key part underpinning China's manufacturing vitality. The country also plans to allocate more than 10 billion yuan from its central budget for cultivating "little giants," or companies that own core technologies, strong innovation capabilities, large market shares and high profitability.