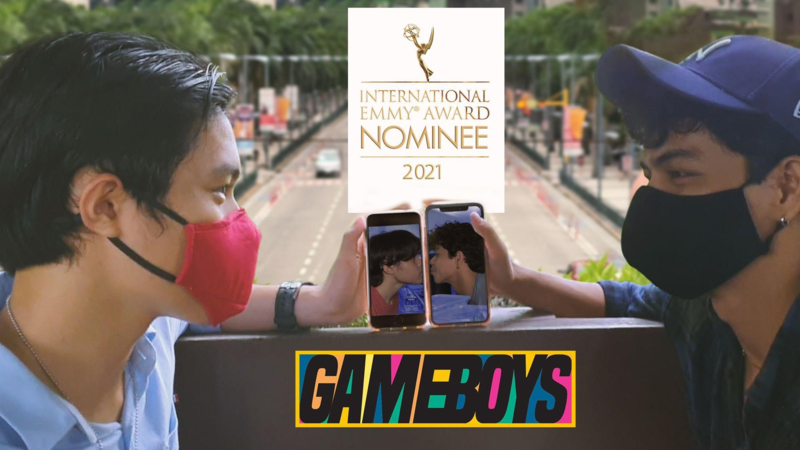 In April 2020, when the pandemic forced most of the world into lockdown, The IdeaFirst Company in the Philippines experimented with a shot-from-home digital series where literally no one was allowed to be physically together.  Using iPhones held by the actors themselves who were filming in their own homes and talking to their co-actors, their director and producers only thru video conferencing, the series entitled GAMEBOYS was born.  Launched on YouTube on May 22, GAMEBOYS amassed such a strong following around the world that by end of the year Netflix picked it up for global release and this October it is nominated at the International Emmy Awards in the Kids Live Action category.

“At the time everyone was in strict lockdown so we challenged ourselves to film as safely as possible and work with what people had at home,” says Executive Producer Perci Intalan. “The only way for our actors to film themselves is by using iPhones that can be operated by them and that can shoot video in 4K.  We started with an iPhone SE, then an iPhone 10 then later two iPhone 11s. The director and production team monitored everything on Zoom and after each take, footage was sent for the director’s preview thru Telegram. Later, when quarantine restrictions were relaxed and people can film on location again, we still continued using iPhones.” The success of GAMEBOYS is also revolutionary in the Philippines because it is the first to popularize the “Boys’ Love” genre in the country.  It tells the story of two online gamers, Cairo (Elijah Canlas) and Gavreel (Kokoy de Santos), who found a romantic connection in spite of the isolation brought about by the pandemic.  Lauded by critics and audiences alike for its progressive representation of LGBTQ love and family relations while tackling relevant issues such as mental health and even death due to Covid, GAMEBOYS already won Best Web Series at the Seoul Indie Short Awards and participated in festivals in Amsterdam, Buenos Aires and Los Angeles and Vancouver.

This year GAMEBOYS also spawned a movie and a second season that are co-produced by Tokyo-based 108 Japan Inc., Aeon Entertainment and Hakuhodo DY Music and Pictures. “We still can’t believe how many people around the world are watching GAMEBOYS,” says Intalan. “We’ve received so many messages from fans in the USA, Canada, UK, Spain, Netherlands, Brazil, Mexico, Australia, the Middle East, Indonesia, Malaysia, India, Nepal.  We were featured in Teen Vogue USA, Digital Spy, Pink News, Harper’s Bazaar Taiwan and by so many podcasts and online press.  And now, to be nominated in the International Emmys, it’s just beyond overwhelming.”