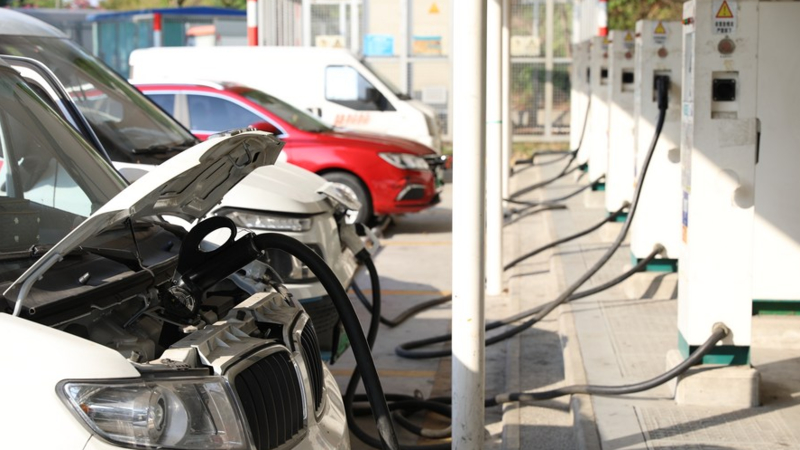 * The cumulative number of charging infrastructure facilities nationwide reached about 4.49 million, up 101.9 percent year on year.

* Behind the boom in charging piles in China is the country's burgeoning NEV industry, which excels in both production and marketing.

The rapidly increasing charging piles in Guangdong, one of China's economic hubs, have not only met the needs of drivers but also laid a solid foundation for the infrastructure construction of the NEV industry. 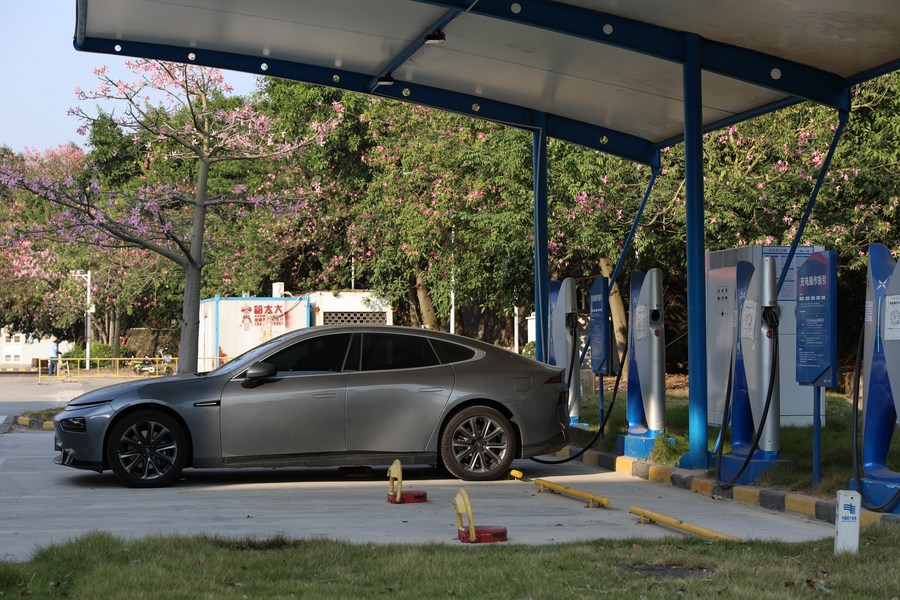 In the provincial capital Guangzhou, a charging pile could be installed in a private parking space within seven days, which is almost as fast as the delivery of new automobiles.

Industry insiders believe that the optimized top-level design has ascertained the course for the rapid expansion of the charging infrastructure.

Relevant state departments have proposed to guide social capital to take part in the construction and operation of the charging infrastructure system.

Both state-owned and private enterprises can engage in the development of the charging pile market, noted Li Baohua, a professor at the Tsinghua Shenzhen International Graduate School.

Fifteen major enterprises, including TLED, Star Charge, State Grid, China Southern Power Grid and Evking, have been active in the construction and operation of charging piles, accounting for 92.9 percent of the market, according to EVCIPA.

Thanks to joint efforts, Guangdong has accelerated the building of an intelligent and safe energy vehicle charging infrastructure system with adequate functions, reasonable layout and stable operation.

The coverage rate of fast charging stations in expressway service areas of Guangdong has reached 96.2 percent. In Guangzhou, charging facilities or installation infrastructures are required to be designated for parking spaces in newly-built communities. In Shenzhen, the coverage rate of charging piles is close to 90 percent.

Expanding the NEV charging infrastructure to the corners of the vast countryside is also a great accomplishment. As of this October, all the 1,123 townships in Guangdong have been equipped with charging pile facilities. 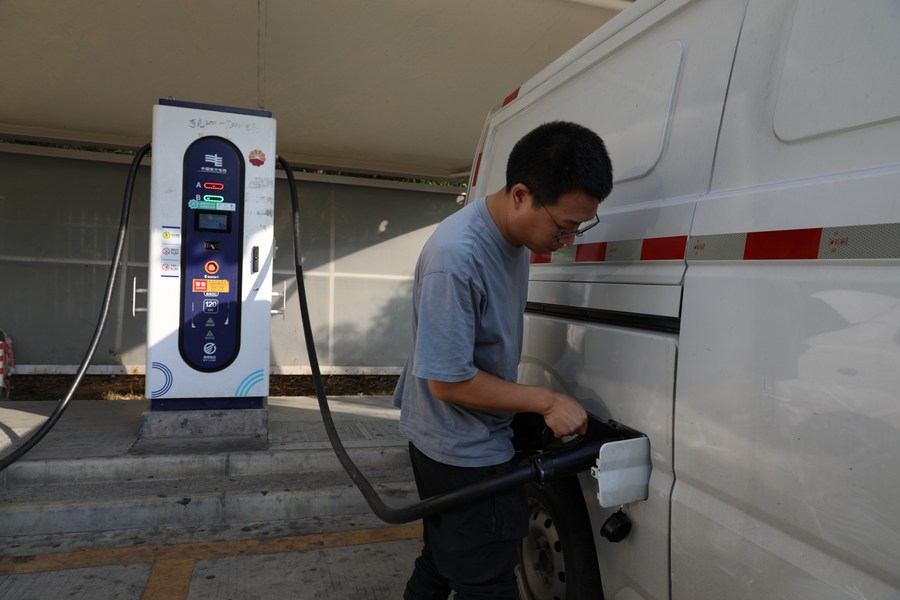 A man charges his new energy vehicle at a service area along the Guangzhou-Shenzhen expressway in south China's Guangdong Province, Oct. 27, 2022. (Xinhua/Li Jiale)

Behind the boom in charging piles in China is the country's burgeoning NEV industry, which excels in both production and marketing.

Data from the China Association of Automobile Manufacturers show that from January to September this year, nearly 4.72 million NEVs were produced and 4.57 million were sold in China.

In the same period, China exported 389,000 NEVs, more than doubling year on year. Driven by the increase in NEV export, China's automobile export stood at nearly 2.12 million units, surpassing that of Germany in the period and becoming the world's second-largest automobile exporter.

Favorable market policies will continue to boost the NEVs market. On Sept. 26, the Ministry of Finance, the State Taxation Administration, and the Ministry of Industry and Information Technology extended the purchase tax exemption policy for NEVs to the end of 2023.

Many local automobile brands have also decided to forge cooperation with tech enterprises to empower NEVs and charging piles.

"This is incredible. My car has been fully charged after I bought a cup of coffee," said an NEV owner surnamed Jiang, expressing her delight with the charging efficiency in the supercharging and battery swap station built by Guangdong Powergrid Electric Vehicle Industry Service Co., Ltd. 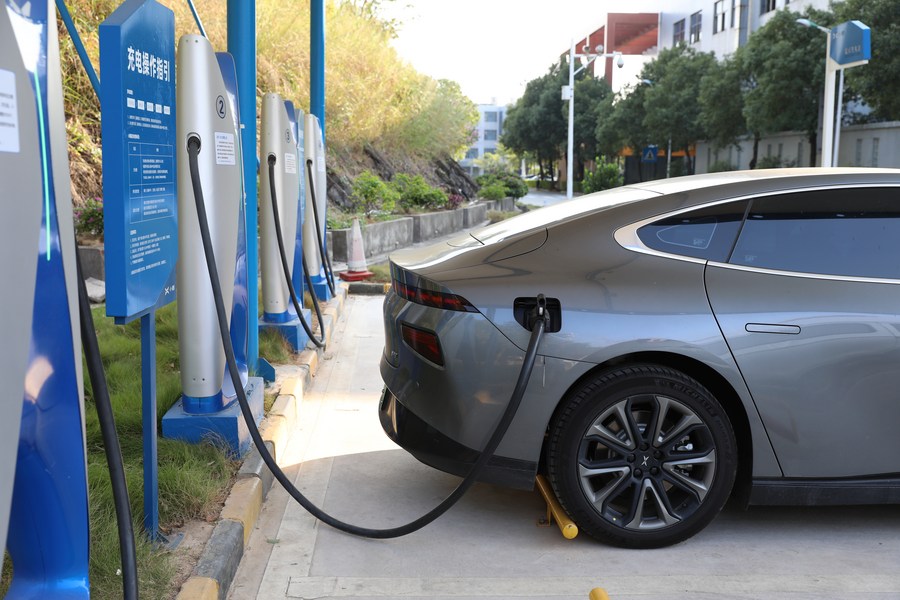 Chinese automaker GAC Aion has planned to build 220 charging stations in Guangzhou within 2022 and increase the number to 1,000 by 2025, according to a GAC Aion official. It also plans to expand its coverage of superchargers to about 300 cities across the country.

"In the first half of this year, China's market penetration rate of NEVs has exceeded 20 percent. There is a growing demand for battery recharging," said Huang Xiangdong, chairman of Guangzhou Greater Bay Technology, which is dedicated to offering a faster charging experience and reducing site occupancy and investment in charging facilities.

The coverage of charging infrastructure is expanding, and so is the capacity to ensure charging services.

Guangdong Power Grid Corporation is expected to invest more than 4 billion yuan in Guangdong during the 14th Five-Year Plan period (2021-2025) to accelerate the construction of charging infrastructure, and put another 40,000 charging piles into operation, according to an official with the company.

It will also promote the construction of charging facilities in residential communities and improve the charging network along highways, so as to provide charging service guarantee for NEV users.

"From rapidly growing NEVs to the extensive layout of charging piles, the industry chain of NEVs is full of vitality, injecting 'green energy' into China's economic transformation and upgrading," Li Baohua said.