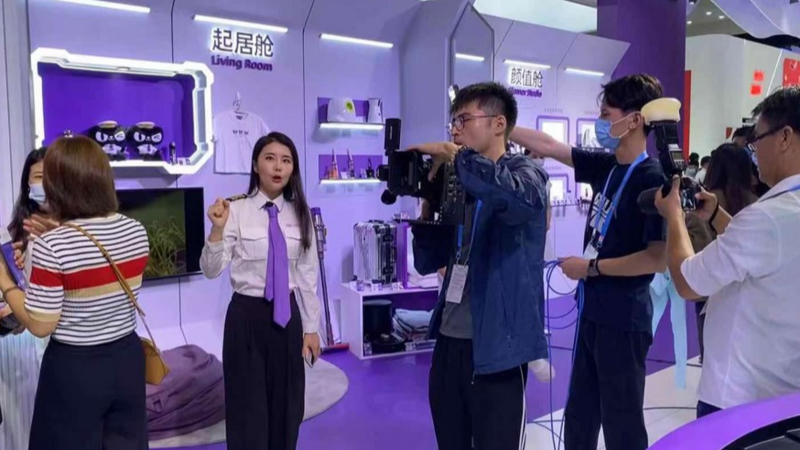 Livestreamed fashion week, up to 50 percent discount vouchers and more convenient group purchase options were some of the new features of this year's mid-year online shopping festival in Shanghai.

The "618" online shopping fest that took place on June 18 was the first shopping spree after Shanghai eased COVID-19 curbs and resumed work and production, and retailers have seen a revitalizing trend.

After an initial postponement due to a COVID-19 resurgence, the Shanghai Fashion Week this year was held online from Friday to Sunday via Douyin, the Chinese version of TikTok, coinciding with the "618" shopping spree.

During the six-hour daily livestream of the fashion event, different types of catwalks, such as scenes in cement workshops and classic theater, were revealed, while films and other forms of multimedia were used to tell consumers stories behind fashion, according to the organizer.

Sun Laichun, founder of Forest Cabin, a herbal skincare product manufacturer, said that their factory in Songjiang District has been in full production in the run-up to the shopping event after the epidemic waned.

"People have a passion for life and their consumption demand sustains," said Sun, whose marketing staff livestreamed to sell products during the epidemic. Despite offline stores being closed, the company's revenue increased by 12 percent and 15.9 percent in April and May, respectively.

"Along with e-commerce platforms, we also launched promotions in around 400 stores nationwide during the '618' shopping festival, and expect a revenue of over 100 million yuan (around 15 million U.S. dollars) during the event," Sun added.

According to a recent document released by the municipal government, Shanghai plans to support renowned retailers and e-commerce platforms to put vouchers into circulation, and capitalize on festivals to boost consumption.

"By providing targeted subsidies to Shanghai residents, we hope to boost consumers' confidence and the recovery of consumption, and unleash purchasing potential," said a manager with Pinduoduo, an e-commerce platform.

During the festival, the platform has provided vouchers of over 3 billion yuan for consumers in Shanghai exclusively, who can receive discounts of up to 50 percent.

Bailian Group, a Shanghai-headquartered retailer, initiated a series of shopping events last week. More than 220 merchandising activities are to take place over the next three months, with 1.8 billion yuan vouchers.

More than 2,200 retail stores of Bailian will take part in the integrated marketing campaign, through both online and offline operations, to meet the market demand, said its chairman of the board Ye Yongming.

"We hope to improve people's shopping convenience through group purchase," said Wang Xiaoyan, general manager of the omnichannel subsidiary of Bailian, which launched group purchase channels during the epidemic.

Earlier, the service required consumers to purchase dozens or hundreds of items, while currently, the threshold is lowered so that even a group order of a few goods can be delivered to communities, according to the Bailian's online platform.

In addition to ordinary logistics for shipping products, Pinduoduo has also propelled group purchases in the "618" shopping festival, to diversify service, facilitate customers and reduce the uncertainty of online shopping.

Group buying has now become a new engine for driving enterprises toward a digital economy and stimulating consumption, said Yu Fei, who works with a company that guaranteed food supply during the epidemic.