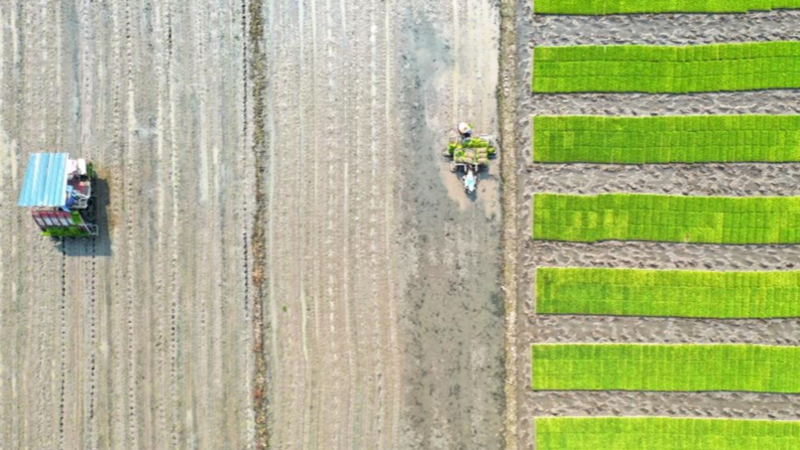 From the comfort of his own home, and with a few taps on his smartphone, Li Chunlai, who runs a farming cooperative in southwest China's Sichuan Province, can manage the temperature and humidity of cold storage full of Sichuan peppers.

The app has proved crucial to Li's business, especially when he had to make prompt inventory management decisions when pepper prices hit a volatile patch.

"When copious freshly-harvested Sichuan peppers hit the market last year, the price slumped to 56 yuan (about 8.8 U.S. dollars) per kg. By properly managing our inventory, we waited for the better price of 68 yuan," said Li, who, along with his partners, manages a 2,600-mu field (about 173 hectares) of peppers in the city of Dazhou in Sichuan.

Li's cooperative made a profit of over 1 million yuan last year despite the weak market.

Similar to Li, new technologies are being quickly picked up by farmers across the country, as they aim to grasp a competitive edge in what was once a largely labor-intensive sector. Gadgets like smartphones, offer timely information about policies, technology, prices, weather, and inventories, helping producers to make smart decisions.

In 2020, Chinese authorities released a guideline on the promotion of digital technologies in rural areas; one initiative among many to modernize agriculture, liberate manpower and improve efficiency.

The guideline encouraged the use of big data, artificial intelligence, remote intelligent agricultural machinery, and agricultural drones in rural areas.

The "No. 1 central document" for 2022, the first policy statement released by China's central authorities this year, called for even greater efforts going forward to develop digital villages and push smart agriculture.

Soon after becoming a farmer in Dazhou eight years ago, Yang Qiang lost about 300,000 yuan after failing to sell his products due to a lack of experience and resources.

Tentatively, Yang posted a video online promoting his chickens. Surprisingly, the folksy video shot on a muddy village road drew an outpouring of support from viewers and helped him sell all his chickens and eggs.

Inspired by the initial success, Yang began to live-stream his life on the farm with his wife. Today, he almost entirely relies on e-commerce platforms to find customers.

"I have installed nearly all the e-commerce applications on my phone," said Yang. "I also share my experience with my fellow farmers."

Experts believe mobile technology has played a big part in promoting intelligent agriculture in rural areas, especially in the country's western regions where digital infrastructure has yet to be fully developed.

"With their high popularization rate, smartphones have helped accelerate the digital transformation in the rural areas," said Chen Duan, director of the Digital Economy Integration Innovation Development Center of Central University of Finance and Economics.