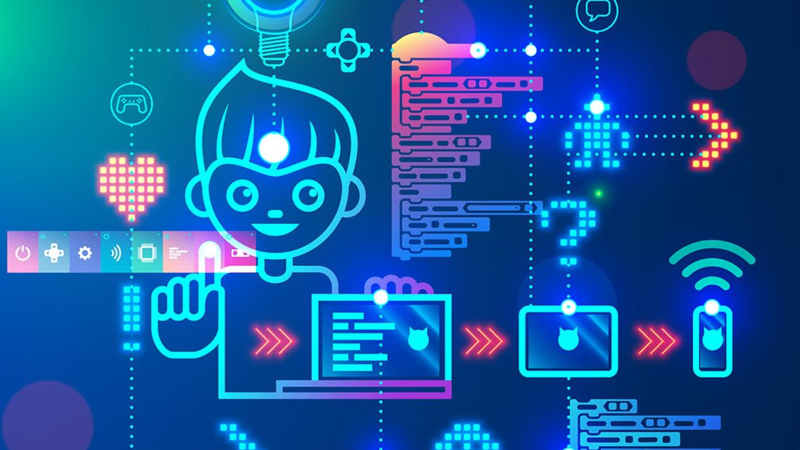 A new Kaspersky Safe Kids study has revealed what children were interested in during 2020 - 2021. Over the past year, their interest has grown in the categories of ‘software, audio and video’ and ‘e-commerce’, while ‘internet communication media’ and ‘computer games’ have slightly decreased. YouTube, TikTok, and Line are at the top of the most popular applications in Thailand. YouTube ditches other apps with highest level of popularity (30.30%).

2020 turned out to be one of the most unusual years for modern children. The pandemic has changed many common life situations across the globe, including education, meeting friends and family, recreation, and entertainment. Kaspersky analyzed anonymized data, such as search queries, the most popular Android applications and website categories requested voluntarily provided by Kaspersky Safe Kids users, to explore how the interests and needs of children have changed under the new conditions.

The most popular website categories among Thai children were ‘software, audio, video’ (43.79%), ‘internet communication media’ (24.85%) and ‘computer games’ (12.54%). Among the most popular apps, YouTube leads by a wide margin – the service remains the most popular video streaming service among children around the world. In second place is Cong GuardTour, third is the popular social network TikTok, followed closely is messenger application Line. The top 10 also includes two games: Roblox and RoV. 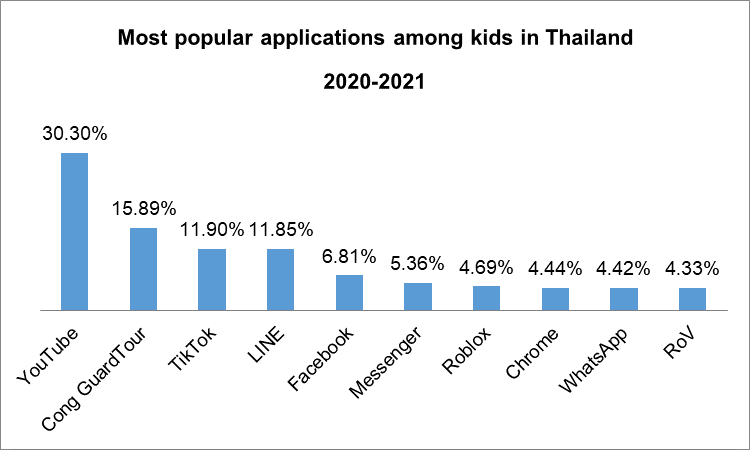 Children worldwide are very active in listening to and watching music videos on YouTube – its share is 17.35% in searches for music genres and videos. A number of ‘trend’ videos were also visible in the statistics – ‘pop it and simple dimple’ and ‘ASMR’ account for 4.43% of the queries. This year, requests related to the video game maker Gacha Life also stood out in the top ratings of children from all over the world with a share of 4%.

When it comes to music tastes, alongside traditional leaders like K-POP bands BTS and BLACKPINK, singers Ariana Grande, Billie Eilish and Travis Scott, another musical genre, like ‘phonk’ became popular. There is also a global trend towards ‘creative’ videos – more and more requests for beats, samples and lessons on creating music in various programs began to appear at the top of the list. At the same time, TikTok remains the main musical trendsetter for children around the world.

Cartoons account for half (50.21%) of all video searches by children around the world. The most popular ones are Lady Bug and Super Cat, Gravity Falls and Peppa Pig. In second place were various TV shows – the most frequent search in English was The Voice Kids. In movies and TV series, the most popular trailers were Godzilla vs Kong, Zach Snyder's recent Justice League and the Disney+ mini-series WandaVision. Netflix also continues to attract the attention of more kids – the most frequent requests via the platform were for Cobra Kai and the now iconic Stranger Things.

TikTok remains the undisputed leader among children, but at the same time, the perception of the social network has begun to transform. Now it is no longer only a social network for clips and lip syncs, as more educational and creative content has begun to appear on the platform. At the same time, to create TikTok videos, one person has to do the work of the operator, actor, director, and the entire film crew. All this develops skills that can not only be useful for children in the future, but could lead them to choosing it as a profession.

For video games, those global trending the most with children include Minecraft (22.84%), Fortnite (6.73%), Among Us (3.80%), Brawl Stars (6.34%) – which recently captured the attention of children and is very popular – and the much-loved Roblox game (3.82%). At the same time, the most frequently played game in the top 10 for almost all countries is Roblox. Of all the regions, it was children from Kazakhstan who became leaders in visiting sites devoted to computer games – 26.01%. In second place were children from the UK (19.40%). But we see a very different picture in India, where children hardly ever visited sites dedicated to video games from a PC (just 5.08%).

“Modern children grow up with gadgets in their hands from a very young age, so they adapt to the digital space and master new technologies much faster. We see how TikTok has become one of the main trendsetters among children in a short time and continues to keep their attention. At the same time, YouTube hasn’t lost ground and remains the leader in popularity among children, in part due to the huge variety of videos, ranging from ‘let-plays’, documenting the playthrough of a video game, to educational lectures and clips. Understanding and analyzing the interests of children on the internet helps us to pay attention to the issue of safety. By knowing what kind of music, a child listens to, who their favorite bloggers are or what games they play, parents can strengthen their trusted relations with kids. For instance, they could film a TikTok video together. This will also let parents help their kids to protect themselves from potential hazards online,” comments Anna Larkina, web content analysis expert at Kaspersky.

To ensure children have a positive online experience, Kaspersky recommends that parents: