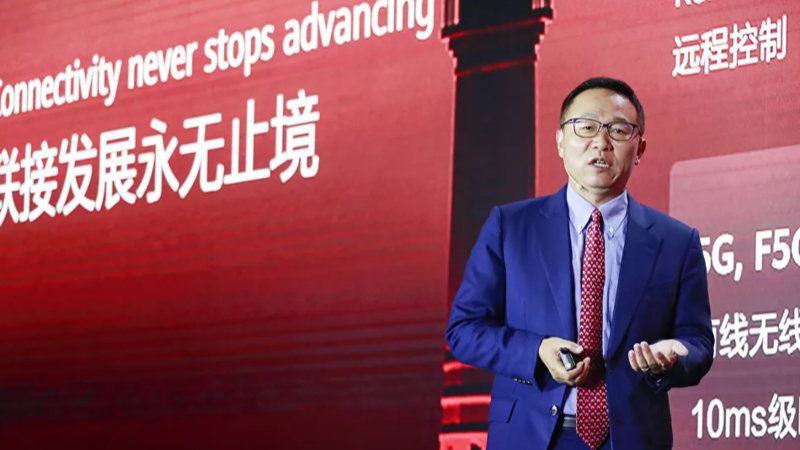 The high-level exec to the world's largest IT equipment provider outlined detailed plans for the incremental spectrum generation at an event taking place from 12 to 13 November in Shanghai.

2020 would be a crucial year for 5G as global telecoms reached deployments of over 800,000 5G base stations across 110 networks, Wang said.

Devices had become more affordable, with some 5G handsets priced around 1,000 yuan ($151 USD) in China, he said, adding that nearly 200,000 Chinese citizens have subscribed to 5G services.

Speaking to Mobile World Live, Wang said that it was the right time to consider 5.5G to ensure 5G's continued evolution, which could remain for 30 years or more.

“The name is not important. What is important is the concrete evolution or improvements we must make in the industry,” he said, adding that it required "five to eight years" to develop new mobile standards as well as several generational steps.

The news comes after China deployed 670,000 5G base stations, or 70 percent of the world's 5G deployments, meeting its targets ahead of schedule, a Global System for Mobile Communications Association (GSMA) report found.

US Telecoms Push 'Next G' Alliance

The comments come after three companies - Google Inc, Apple and LG Electronics - joined the Next G Alliance, a coalition of tech giants launched by the Alliance for Telecommunications Industry Solutions (ATIS) aimed at building 6G networks.

The group has received backing from US and Canadian telcos as well as Sweden's Ericsson and Finland's Nokia, among others, to boost North America's position as a leader of 6G technologies, it announced on Thursday.

Numerous firms such as Cisco, Hewlett Packard, Intel, VMware and others have joined the initiative, the statement read.

But Huawei Technologies has been excluded from the alliance due to the ongoing trade war, despite the Chinese tech giant being one of the first to propose 6G last year, Mobile World Live explained.

But despite the alliance push for 6G, a GSMA report found numerous "triggers" and service affordability would determine when generational networks would mature enough for a new generation to be released.

Roughly 80 percent 4G coverage and 60 percent smartphone adoption would need to be reached before "users and policymakers in highly developed mobile markets" could expect 5G availability.

Competition would "remain a big market force for the foreseeable future", the report said, adding it would lower costs as well as promote innovative products and services.

"A supportive policy framework and a level playing field between competitors is vital in enabling a market environment that supports the ability of the industry to invest in 5G. When these conditions are less ideal, or supportive, industry financial health may be negatively impacted," the report read.

The news comes after a report found that government slowdowns in telecom approvals and spectrum auctions had become a major concern in the deployment of 5G networks, with a greater effect than COVID-19 supply chain constraints.

Huawei Technologies has been excluded from numerous telco markets in Australia, the United Kingdom, and Sweden, with the latter reversing its decision due to a court challenge in November.

The rise of tech nationalism has become a major concern in the telecoms industry, namely after Washington said it would join the Canadian-led Global Partnership on Artificial Intelligence and a further pact with Downing Street.

The US blacklisted Huawei, ZTE and dozens of Chinese tech firms in May 2015, citing national security concerns, and launched a campaign to block the former from doing business with international partners, including targeting the firm's access to key technologies such as semiconductors, software, and others.