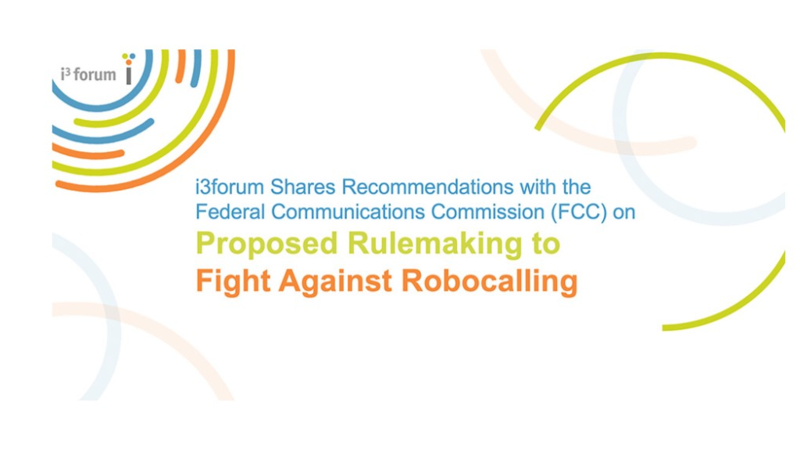 i3forum, a not-for-profit industry body enabling and accelerating transformation across the carrier ecosystem, has filed comments with the Federal Communications Commission (FCC) on its proposed rulemaking to fight against robocalling. i3forum fully supports the FCC’s continuing efforts to eliminate robocalling, but requests that it takes into account the complexity of the international telecommunications ecosystem.

The FCC’s Further Notice proposes rules that would place obligations on gateway providers to assist in combatting foreign-originated illegal robocalls. Gateway providers are at the end of a long and unpredictable chain of carriers that play a role in transporting foreign-originated calls to recipients in the United States. Due to this, they often lack the necessary information to mitigate robocalling using the procedures proposed in the Further Notice.

“i3forum supports the FCC’s goal of “eliminating the scourge of robocalling” and agrees that gateway providers should lend a hand in the fight against illegal robocalls originating abroad,” said Philippe Millet, Chairman at i3forum. “However, the FCC could help to reduce the volume of illegal traffic coming into the U.S. by equipping gateway providers with additional tools to identify problematic traffic, rather than imposing unrealistic obligations. We believe the FCC should create incentives for gateway providers to use such tools, and base its decisions on the realistic abilities of providers to meet the proposed rules.”

Some of i3forum’s main comments include:

“While gateway providers are committed to helping the FCC in its ongoing battle against illegal robocalls, the FCC should be mindful of their limited ability to meet certain proposed obligations,” added Millet. “Our aim is to put forward recommendations to help the FCC consider efficient robocall mitigation strategies that are consistent with carriers’ capabilities and can be implemented across the industry.”

Gateway providers share the FCC’s goal of preventing illegal robocalls from traversing their networks – they just need the tools and guidance to do so in the complex international calling industry of today. Read i3forum’s comments in full here: https://bit.ly/3s9vCrx