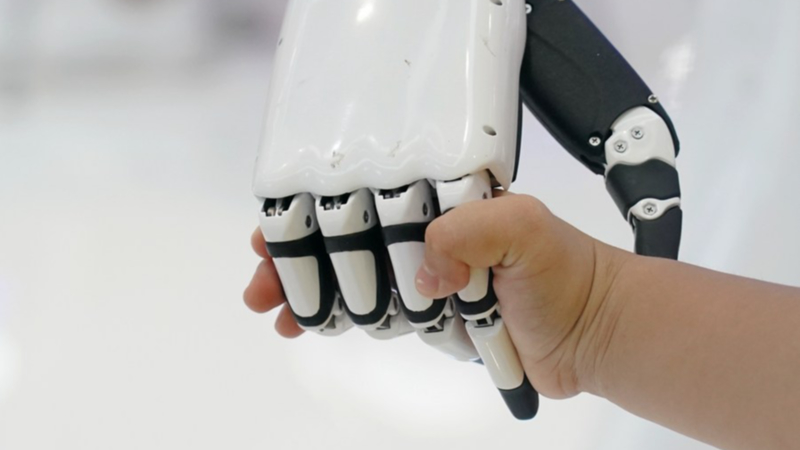 * The World Robot Conference 2022 showcased more than 500 sets of robots, with over 30 of them making world debut.

* In China, the robot industry has been developing extremely quickly, injecting strong impetus into the country's economic and social development.

* China strives to become a global hub for robotics innovation by 2025, putting together a group of leading enterprises with international competitiveness and forming several industrial clusters with an international influence.

From cutting-edge biomimetic robots to medical robots to agricultural robots which can pick fruits -- more than 500 sets of robots have shown up at the World Robot Conference 2022 (WRC 2022) which have brought visitors closer to what life will be like in the future.

The four-day event, with more than 130 robot enterprises and scientific and research institutions in attendance, kicked off on Thursday in Beijing, with over 30 of the 500 sets of robots making their world debut.

Research and development, manufacturing and application of robots have been used as indicators to gauge a country's scientific and technological innovation and high-end manufacturing level. In China, the robot industry has been developing extremely quickly, injecting strong impetus into the country's economic and social development. 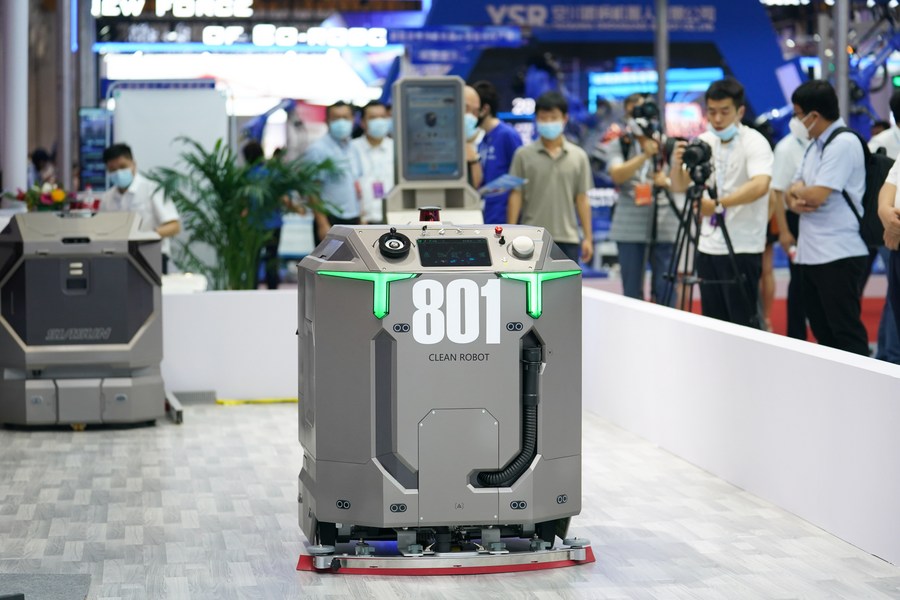 Photo taken on Aug. 18, 2022 shows an industrial cleaning robot during an expo of the World Robot Conference 2022 (WRC 2022) in Beijing, capital of China. (Xinhua/Ju Huanzong)

In the exhibition hall, a large robot, also making its debut, has caught the interest of many of the visitors. The robot is an industrial cleaning robot designed to enhance safety, increase productivity, as well as alleviate pressure on the, at times overworked, cleaners.

"In some factories, there are many devices already in operation. Manual cleaning can interfere with the normal operation of the factory, or even worse, suspend production," said Zhang Lei, technical director at the Siasun Robot and Automation Co., Ltd., based in Shenyang, northeast China's Liaoning Province.

"With the large industrial cleaning robot being used, a vast improvement in both production safety and cleaning efficiency can be seen. The robot can be applied at unmanned intelligent factories and workshops of the new energy battery," Zhang added.

A quadruped walking robot that weighs over 30 kg, and is able to jump about 1.2 meters high, also amazed the audience at the WRC 2022.

Zhang Weimin, deputy director of the intelligent robot institute at Beijing Institute of Technology, said that the quadruped walking robot was the outcome of years of continuous efforts of technological innovation.

"The team made key breakthroughs in many aspects these years, such as core components, software algorithm and integrated application. We achieved independent R&D in motor, decelerator and controller at fewer costs, and the products are of higher quality in comparison with those abroad," Zhang Weimin said.

"The exoskeleton robot has now been used in fields of healthcare, logistics and fire protection. Thanks to the favorable supporting policies and the great market potential, we have increased research and development, and made continuous breakthroughs in the field," said Wang Chunlei, director of the robot center at the robot company of China Electronics Technology Group Corporation. 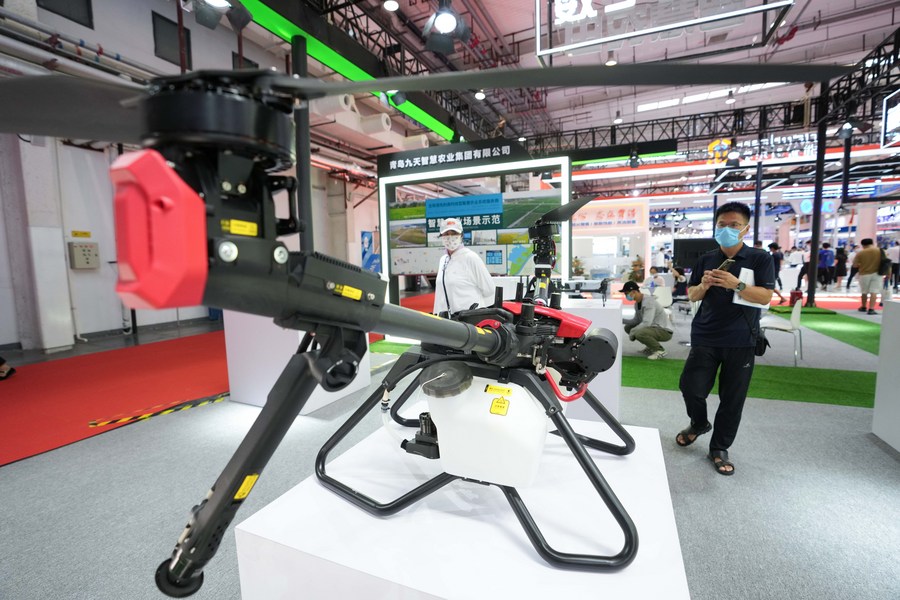 China issued a guideline for the robotics industry for the 14th Five-Year Plan period (2021-2025) in December 2021. The country will strive to become a global hub for robotics innovation by 2025, putting together a group of leading enterprises with international competitiveness and forming several industrial clusters with an international influence.

"Beijing Economic-Technological Development Area now has over 60 intelligent factories, in which logistics and service robots both play a vital role," said Liu Li, deputy director of the area's administration committee, adding that 12 companies from the area participated in the WRC 2022.

The area will further improve the capacity and modern development of the whole industrial chain, carrying out innovative robots and industrial clusters of intelligent manufacturing, Liu added.

Furthermore, more than 10 robot companies from the Sino-German industrial services zone (Sanlongwan) in Foshan, south China's Guangdong Province, brought new robot products to the conference that can be applied in disinfection and laser cutting. 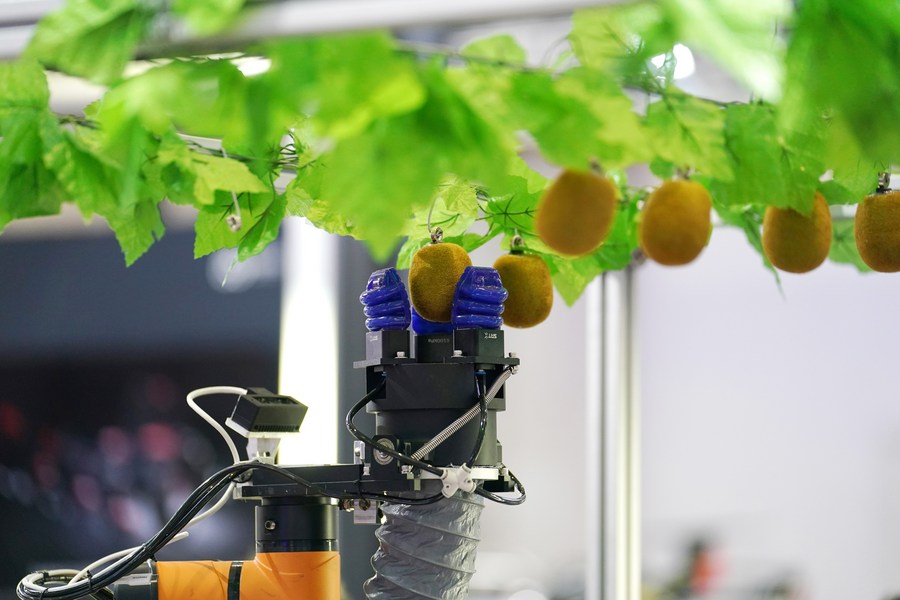 Li Jie, an official of the management committee of the Sino-German industrial services zone (Sanlongwan) said that there are 56 robot-related upstream and downstream enterprises settled in Sanlongwan, indicating an increase in the impact of the robot cluster here.

"Robots are now being developed in a direction where sensitiveness, intelligence and safety are paramount. The technological evolution speeds up, leading to an extended application of robots," said Chen Ying, secretary-general of the Chinese Institute of Electronics.

The development of the robot industry accelerates the intelligent transformation of manufacturing and many other fields in people's daily life with advanced technologies, Chen added.

"Looking ahead, we are heading for an intelligent era in which the potential of robots is limitless. China has a broad market for robots, rich resources for innovation, and a desirable development environment and robot industrial ecosystem. We are willing to cooperate with partners from all over the world to share opportunities and embrace an intelligent future," said Xin Guobin, China's vice minister of industry and information technology.